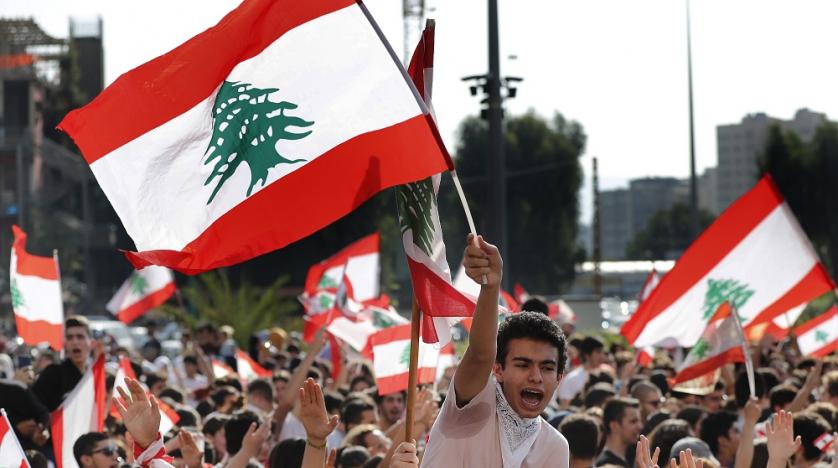 Asharq Al-Awsat received the draft statement that will be issued by the meeting of the International Group in Support of Lebanon, which will be held in Paris later on Wednesday.

According to the statement, representatives from China, Egypt, Germany, Italy, Kuwait, Russia, Saudi Arabia, the United Arab Emirates, the United Kingdom and the United States, the European Bank for Reconstruction and Development, the European Investment Bank, the European Union, the International Monetary Fund, the Arab League and the World Bank participated in the meeting, in addition to a Lebanese delegation.

Members of the international community recognize that Lebanon is facing a crisis that puts it on the brink of an economic collapse and greater destabilization, the statement read.

In order to stop this financial and economic deterioration, restore confidence in the economy and address social and economic challenges in a sustainable manner, members express the urgent need to endorse a large, reliable and comprehensive policy package to implement economic reforms that restore Lebanon’s financial stability and address long-term structural deficiencies. These measures hold great significance for their ability to provide answers to the aspirations expressed by the Lebanese since October 17, according to the draft-statement received by Asharq Al-Awsat.

Group members stress that maintaining Lebanon’s stability, unity, security, sovereignty, independence and territorial integrity requires the rapid formation of a government that has the necessary capabilities and credibility to implement the needed economic reforms package in order to distance the country from regional tensions and crises.

Accordingly, members of the International Support Group for Lebanon call on the Lebanese authorities to approve the budget for 2020 during the first weeks that follow the formation of a new government and adopt measures pertaining to permanent revenues and expenditures, with the aim of achieving sustainable improvement in the basic balance, while strengthening social safety nets to protect the most vulnerable segments of the population.

Saad Hariri resigned as prime minister on October 29 following unprecedented popular protests against the government and the entire ruling political class, whom the people accuse of rampant corruption and leading Lebanon to the worst economic crisis since its 1975-90 civil war.

The group also urge Lebanese authorities to take decisive measures to restore the stability of the financial sector, address the problem of corruption, and implement a plan to reform the electricity sector. In the longer term, during the first six months after the formation of a government, structural measures must be taken to ensure the adoption of a sustainable economic model, the statement read.

The international community members reaffirm that the results of the CEDRE Conference, which were approved by the Lebanese authorities on April 6, 2018, are still valid. The group members see the vital importance of support by international financial institutions to help the authorities continue their efforts to implement the necessary economic reforms over time.

Members of the international community express their willingness to support the implementation of such measures, including providing assistance to ensure Lebanon’s access to basic commodities.

Members of the group pay tribute to the Lebanese armed forces and the Internal Security Forces for the actions they have taken to protect demonstrators and the rights of citizens. The group members reaffirm the need to respect the right to peaceful protest and call on all parties to act responsibly.

The Lebanese delegation expressed its commitment to work with the international community to implement this road map. The group welcomes the possibility of holding future meetings at various levels, as required.

Health Tips And Benefits Of Healthy Lifestyle You Should Consider

The Most Important Thing You Need To Know About Success