A tour of Beirut’s hidden beauty 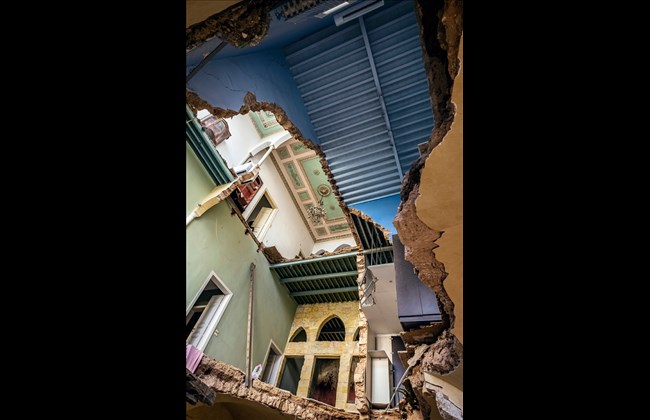 The latest exhibition at Beit Beirut, “Beyrouth | Beirut,” takes a close look at the city’s hidden beauty, through the lens of Lebanese photographer Fadia Ahmad.

Curated by Pascale Le Thorel, the exhibition, which opened last month during the Beirut Art Fair, shows just under 100 snaps, selected from seven years of documentation.

Split into seven sections, the exhibition traces the photographer’s ritual walks around the city that she used to reconnect with her homeland. Born in 1975 in Spain, Ahmad returned to Lebanon in 1991 to study and found herself searching for the missing Lebanese part of her identity.

“I was reconciling with my roots,” Ahmad told The Daily Star. “When I first came here it was a very hard moment. When I was living abroad, everyone would ask, ‘What does Fadia mean? Where do you come from? What is Lebanon?’ So I always lived with this dream of going back to my roots when my parents wouldn’t allow me.

“The day I stepped into the Beirut I thought my dream was being realized,” she added, “but I faced the same questions. I was asked what region I come from, what religion I follow, which political party I support.

“I had to take a step back and my photography helped me do that,” Ahmad said. “I decided to go to the streets every single day, all seasons, all weather, and walk 10,452 steps, mirroring the area of Lebanon, 10,452 kilometers squared.”

With time, the photographer began seeing the city in a new light and commenced documenting it. It wasn’t until she met Le Thorel in 2003 that her project began to take a more artistic and structured shape.

“It all started in this building Villa Clara where I met Pascale for the first time,” she said, gesturing to a photo of Villa Clara displayed in the first section of the show. “She was writing the biography of Shafic Abboud seven years ago and we met.

“Seven is a very important number for me and this exhibition. We met seven years ago. We have seven parts of the exhibition. I’m a seventh daughter. Beirut has been rebuilt seven times.”

Although Ahmad started out using an analogue camera, she switched to digital in 2006 after bombings in south Lebanon destroyed her entire archive.

The section titled “An Urban Geography” is dedicated to photos of the brightly colored facades of the Ottoman, mandate and art deco houses of Mar Mikhael and Gemmayzeh. In “The Time Stopped,” Ahmad highlights the abandoned train stations of Lebanon’s former rail system.

The pictures in “Architectures – Past and Present Confronted” approach Martyrs Square, Beirut Central District (formerly “Al-Bourj”) and their surroundings, drawing attention to the urban stratification that reshaped Beirut’s former downtown core after the Civil War.

“Communities” comprises photos of Lebanon’s various religious sects and their presence in Beirut. This section’s centerpiece, “This is Us,” shows the minaret of the Mohammad al-Amine Mosque and the elongated bell tower of the St. George Maronite Church, standing side by side.

“In my photos you’ll see the Ottoman-style architecture, the past and present, the stillness of the city,” Ahmad said. “I also didn’t use many photos of people because it is the city of Beirut that matters, so I focused on that. It’s important to explore the details and express that sometimes if you stop and look properly, you will see amazing things.”

“Neighborhood Life” is among the few sections in the exhibition whose photos show people. Here Ahmad shows Beirut’s communities of homeless people, shopkeepers and cafe owners with whom she interacted during her daily walks. The last two sections are devoted to the seaside Corniche and the fishermen who make a living there.

Finding some good Ebooks to read won’t take much time at all once you have made the decision to sign up with “TOP platform“ The Online Publishers .

I still believe that if your aim is to change the world, journalism is a more immediate short-term weapon.” – Tom Stoppard – Visit THE ONLINE PUBLISHERS TOP online journalists to offer your services as a journalist. A Chance To Make Money Online With Freelance Journalism

HOW TO TAKE GOOD PICTURES OF YOURSELF

The most uplifting song according to science